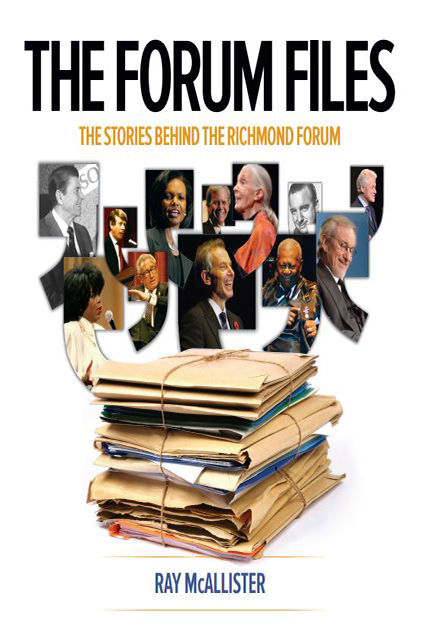 The Stories Behind The Richmond Forum

The Richmond Forum is likely the premier speaker series in the U.S., with a roster of Who’s Who speakers: George H.W. Bush, Bill Clinton, George W. Bush, the leaders of most major countries-plus a staggering array of celebrities, journalists, scientists, thinkers, and even athletes.
For The Forum Files, award-winning author Ray McAllister rummaged through more than a half-century of files and meeting minutes, scoured more than 150 years of newspaper articles, and interviewed scores of Richmonders and Forum speakers to unearth the history and behind-the-scenes stories. Some of the fascinating behind-the-scenes stories in this coffee-table book, lavishly illustrated with 200 photographs:
* Former Soviet President Mikhail S. Gorbachev drove his Secret Service detail batty, repeatedly ordering his car stopped so he could jump out and meet ordinary Richmonders.
* Famed director Steven Spielberg doesn’t accept speaking invitations-but he made an exception for a fascinating evening in Richmond.
* Archbishop Desmond Tutu sneaked away privately before his speech-to visit the statue of his late friend, Arthur Ashe, Jr.
[br]
* Baseball superstar Cal Ripken, Jr., meeting with three young players, couldn’t have known one would become a football superstar. That fourteen-year-old, Russell Wilson, himself agreed to appear at The Forum twelve years later.
[br]
* Secretary of State Condoleezza Rice delivered both a foreign policy speech . . . and a surprise virtuoso piano performance.
[br]
* B.B. King was expected to give a talk, instead, he let Lucille do most of the talking. He drew a standing ovation- and insisted on receiving his very large payment in cash.
[br]
“The Forum Files” should be on the must-read list-and the coffee table-of anyone who loves the inspiring pairing of big names and big ideas.
[br]

We are SO enjoying the book—it is even more phenomenal than we expected it to be! So good to read the history of the Forum before we started attending—30 years ago.

I have never attended The Richmond Forum and received this book as a gift. Still, I found it fascinating to read about all of these very famous and influential people and their experiences in Richmond.

I have learned so much. And even a few mysteries have been solved for me!

Who knew all this was going on behind the scenes at our forum?

Beyond enjoying the amazing photos, I really got pulled into the story. Mr. McAllister has done a wonderful job.

Thanks to the Forum for sharing its many memories and mementos with us!

It is terrific reading; a definite coffee table book.

The book rocks. The Forum rocks!!

My mother attended for years, and I can’t wait to give her this book for Christmas. Thank you for doing this!

BUY NOW AT HALF OFF! AUTHOR-SIGNED, FREE SHIPPING